Just a short while ago, a group of intrepid riders set off on the adventure of a lifetime on their bicycles. They rode from Beijing to Shanghai filming their journey and the trials that a 1,000 mile bicycle adventure threw their way. To pack along all of their camera gear, equipment and supplies they used Axiom pannier bags and racks and Axiom pumps for any flat tires that slowed them down along the way. We just got a release this morning that featured three new screenings of this epic film. Check out the details below.

SEATTLE, Wash. — “Man Zou: Beijing to Shanghai,” the newest feature documentary from the Webby Award-winning producers of “Sonicsgate: Requiem For A Team,” will re-air on PBS affiliate KCTS 9 as part of the Reel NW series on Thursday, March 3 at 10:00 p.m.. The 86-minute documentary first premiered Dec. 2, 2010 to strong reviews as part of the first season of Reel NW, which showcases the best independent film from the Northwest.

The producers of “Man Zou: Beijing to Shanghai” today announced two special theatrical screenings of the film on Feb. 1 at the University of Washington (Allen Library Auditorium) and Feb. 18 at the Seattle R.E.I. (222 Yale Ave. North).

Presented free by the UW Dept. of Geography

Presented by the Cascade Bicycle Club

A recipient of the Seattle CityArtist Grant in 2008, “Man Zou: Beijing to Shanghai” follows director Jason Reid with his three American friends and their Chinese guide as they bicycle more than 1,000 miles between China’s two largest cities. Their journey provides the framework for both a bike adventure film and an in-depth examination of the cultural, social, economic and environmental factors affecting this rapidly changing nation. Official movie website: www.manzoumovie.com

The film’s director and producer, Jason Reid and Ian Connors, are available for interviews. If you would like a press screener of the film for review, please direct any media inquiries to the contacts listed in this release.

“Man Zou” — The Film and The Philosophy

“Man Zou” is a common phrase in Mandarin that translates literally to “Walk Slow.” Used as a farewell, it is a way of reminding one another to be careful and mindful on our journey and take the time to see things along the way.

Shot in fall of 2008 after the close of the Beijing Olympics, the film presents an insightful portrait of China, juxtaposing modern urban cities with breathtaking rural countryside. Featuring interviews with environmental visionary Ma Jun (named as one of the “100 most influential persons in the world” by Time magazine in 2006) and China urbanization specialist Kam Wing Chan.

“Man Zou: Beijing to Shanghai” is the highly anticipated follow up from the creators of the award-winning documentary “Sonicsgate: Requiem For A Team,” which exposed the shocking scandal behind the sale and relocation of the Seattle SuperSonics NBA franchise to Oklahoma City. 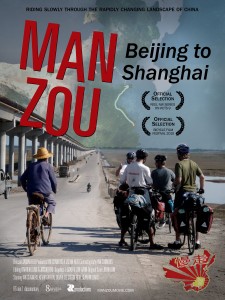 “It blew my assumptions about China

out of the water…”